Description - Into the Night by Sarah Bailey

'Bailey's writing is stronger than ever, and the prickliness of her characters a natural fit for the jarring confines of Melbourne's central business district...a bristling police procedural for fans of Emma Viskic and J.M. Green.' - Books + Publishing, April 2018

Sarah Bailey's acclaimed debut novel The Dark Lake was a bestseller around the world and Bailey's taut and suspenseful storytelling earned her fitting comparisons with Gillian Flynn and Paula Hawkins.

Into the Night is her stunning new crime novel featuring the troubled and brilliant Detective Sergeant Gemma Woodstock. This time Gemma finds herself lost and alone in the city, broken-hearted by the decisions she's had to make. Her new workplace is a minefield and the partner she has been assigned is uncommunicative and often hostile. When a homeless man is murdered and Gemma is put on the case, she can't help feeling a connection with the victim and the lonely and isolated life he led despite being in the middle of a bustling city.

Then a movie star is killed in bizarre circumstances on the set of a major film shoot, and Gemma and her partner Detective Sergeant Nick Fleet have to put aside their differences to unravel the mysteries surrounding the actor's life and death. Who could commit such a brazen crime and who stands to profit from it? Far too many people, she soon discovers - and none of them can be trusted. But it's when Gemma realises that she also can't trust the people closest to her that her world starts closing in...

Riveting suspense, incisive writing and a fascinating cast of characters make this an utterly addictive crime thriller and a stunning follow-up to The Dark Lake.

Buy Into the Night by Sarah Bailey from Australia's Online Independent Bookstore, BooksDirect.

Other Editions - Into the Night by Sarah Bailey 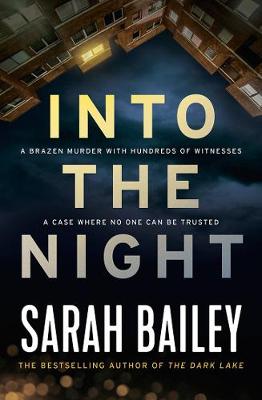 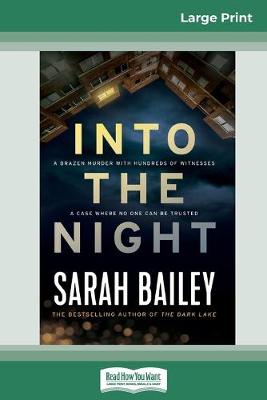