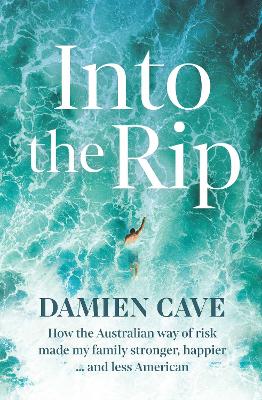 Into the Rip: How the Australian Way of Risk Made My Family Stronger, Happier ... and Less American

Description - Into the Rip: How the Australian Way of Risk Made My Family Stronger, Happier ... and Less American by Damien Cave

When Damien Cave brought his young family to Sydney to set up the New York Times' Australian Bureau, they encountered the local pursuits of Nippers and surfing - and a completely different approach to risk that changed the way they lived their lives.

Damien Cave has always been fascinated by risk. Having covered the war in Iraq and moved to Mexico City with two babies in nappies, he and his wife Diana thought they understood something about the subject.

But when they arrived in Sydney so that Cave could establish The New York Times's Australia Bureau, life near the ocean confronted them with new ideas and questions, at odds with their American mindset that risk was a matter of individual choices. Surf-lifesaving and Nippers showed that perhaps it could be managed together, by communities. And instead of being either eliminated or romanticised, it might instead be respected and even embraced.

And so Cave set out to understand how our current attitude to risk developed - and why it's not necessarily good for us.

Into the Rip is partly the story of this New York family learning to live better by living with the sea and it is partly the story of how humans manage the idea of risk. Interviewing experts and everyday heroes, Cave asks critical questions like: Is safety overrated? Why do we miscalculate risk so often and how can we improve? Is it selfish to take risks or can more exposure make for stronger families, citizens and nations? And how do we factor in legitimate fears and major disasters like Cave has covered in his time here: the Black Summer fires; the Christchurch massacre; and, of course, Covid?

The result is Grit meets Phosphorescence and Any Ordinary Day - a book that will change the way you and your family think about facing the world's hazards.

'The inspiring, hilarious story of how Damien Cave became a life-saver - only to find that the life he saved was his own.' Richard Glover

'It often takes a stranger's eyes to see our own country clearly. By plunging into the Sydney surf, Damien Cave peered into the Australian soul. What he found there - courage, grit, community - is welcome news when our lives and our core values have never seemed so precarious.' Geraldine Brooks

'Into the Rip is a beautiful tale of one family trying to figure things out - and, at the same time, a brilliant synthesis of a century of psychological science on how all of us can learn to dive headfirst into challenges, grow and adapt, and ultimately do well in life.' Angela Duckworth, New York Times bestselling author of Grit

'Cave's viewfinder - the notion of risk - is perfect for our times.' Malcolm Knox

'A big-hearted account of a wild and wonderful ride into a new culture and a new way to live.' Anna Funder


Buy Into the Rip: How the Australian Way of Risk Made My Family Stronger, Happier ... and Less American by Damien Cave from Australia's Online Independent Bookstore, BooksDirect.