What if you weren't sexually attracted to anyone? A growing number of people are identifying as asexual. They aren't sexually attracted to anyone, and they consider it a sexual orientation--like gay, straight, or bisexual. Asexuality is the invisible orientation. Most people believe that "everyone" wants sex, that "everyone" understands what it means to be attracted to other people, and that "everyone" wants to date and mate. But that's where asexual people are left out--they don't find other people sexually attractive, and if and when they say so, they are very rarely treated as though that's okay. When an asexual person comes out, alarming reactions regularly follow; loved ones fear that an asexual person is sick, or psychologically warped, or suffering from abuse. Critics confront asexual people with accusations of following a fad, hiding homosexuality, or making excuses for romantic failures. And all of this contributes to a discouraging master narrative: there is no such thing as "asexual."

Other Editions - The Invisible Orientation by Julie Sondra Decker 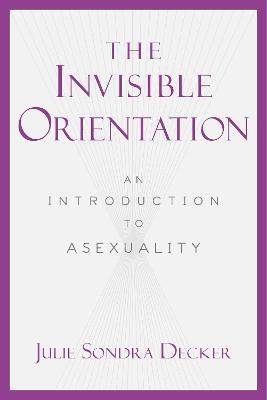 A Preview for this title is currently not available.
More Books By Julie Sondra Decker
View All