Invisible Stars was the first book to recognize that women have always played an important part in American electronic media. The emphasis is on social history, as the author skillfully explains how the changing role of women in different eras influenced their participation in broadcasting. This is not just the story of radio stars or broadcast journalists, but a social history of women both on and off the air. Beginning in the early 1920s with the emergence of radio, the book chronicles the ambivalence toward women in broadcasting during the 1930s and 1940s, the gradual change in status of women in the 1950s and 1960s, the increased presence of women in broadcasting in the 1970s, and the successes of women in broadcasting in the 1980s and 1990s. The second edition is expanded to include the social and political changes that occurred in the 2000s, such as the growing number of women talk show hosts; changing attitudes about women in leadership roles in business; more about minority women in media; and women in sports and women sports announcers. The author addresses the question of whether women are in fact no longer invisible in electronic media. She provides an assessment of where progress for women (in society as well as broadcasting) can be seen, and where progress appears totally stalled. 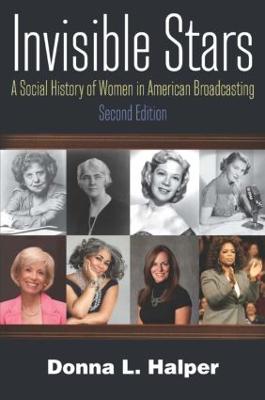 A Preview for this title is currently not available.
More Books By Donna Halper
View All