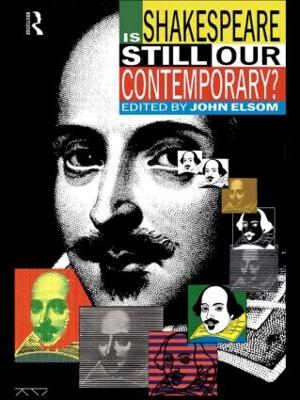 Is Shakespeare Still Our Contemporary?

Description - Is Shakespeare Still Our Contemporary? by John Elsom

The publication of Jan Kott's Shakespeare Our Contemporary some twenty-five years ago had an immediate impact on Shakespearian criticism and productions. This book is an account of a lively public seminar held at the Young Vic Theatre, London which looked at the relevance of Kott's study for Shakespearian theatre today. Kott inspired many directors - including Peter Brook, Peter Hall, and Michael Bogdanov to interpret Shakespeare's plays as allegories of modern times. But a number of critics and directors feel that trying to prove Shakespeare is our contemporary results in the loss of vital Elizabethan references and distortion of the play's meanings. The seminar highlighted areas where Shakespeare's vision seems most at odds with our world, looking at such questions as: Is Shakespeare sexist? Does Shakespeare translate? Is Shakespeare a feudal propagandist? Does Shakespeare write better for television? The seminar attracted a powerful range of internationally known contributors - directors, critics, translators, and actors - as well as Jan Kott himself.
John Elsom has captured the feel of the occasion, preserving the flow of conversation and argument, and reflecting the spontaneous exchange of ideas.

A Preview for this title is currently not available.
More Books By John Elsom
View All