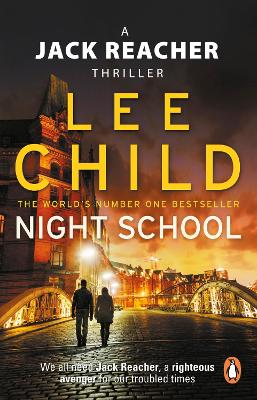 The 21st Jack Reacher thriller by number-one bestselling author Lee Child takes Reacher back to his army days, but this time he's not in uniform. With trusted sergeant Frances Neagley at his side, he must carry the fate of the world on his shoulders, in a wired, fiendishly clever new adventure that will make the cold sweat trickle down your spine.

It's just a voice plucked from the air- 'The American wants a hundred million dollars'.

For what? Who from? It's 1996, and the Soviets are long gone. But now there's a new enemy. In an apartment in Hamburg, a group of smartly-dressed young Saudis are planning something big.

In the morning they gave Reacher a medal, and in the afternoon they sent him back to school.

Jack Reacher is fresh off a secret mission. The Army pats him on the back and sends him to a school with only three students- Reacher, an FBI agent, and a CIA analyst. Their assignment?

To find that American. And what he's selling. And to whom.

Although the Jack Reacher novels can be read in any order, Night School is 21st in the series.