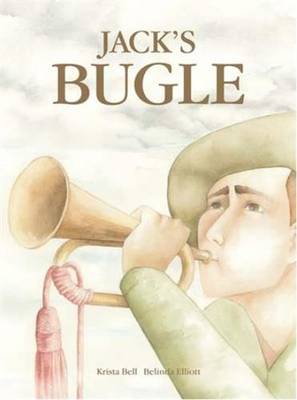 When Aidan Jackson, known as "Jack", leaves his parents' farm to fight overseas in World War I, he is excited by the promise of travel, adventure and new friends. Although Jack's bugle is brought home from the war by his best friend, it lies idle for years and years. Will the bugle ever be played again? 'Jack's Bugle' is a celebration of the music, optimism, mateship and the ultimate peace that were part of "the war to end all wars". Set against the background of the Gallipoli campaign of World War One, this picture book follows the journey of a bugle from an Australian farming town, to the big city, to Egypt, to Gallipoli, back to the city and finally into the hands of a boy from the country town where its adventure began. A few years ago, after speaking at a literature festival in Alice Springs, Krista was told the story of a bugle that had been bought in an Adelaide op shop by an Alice Springs local who then discovered that the bugle had originally come from Alice Springs! The story of a bugle that makes the return journey to and from a war began to simmer and Jack's Bugle was created. The aim was to write a story for younger readers with a unique and gentler way into the history of the Australian soldiers who took part in creating the legend of the ANZACS. In 1914 Aidan Jackson, 'Jack' to his Army mates, is a young man who is proud to join up and excited about the adventures that await him, especially as he is the first person from his farming family to travel overseas. He takes with him the shiny new brass bugle given to him by his family on his 18th birthday and it is the bugle's journey we follow until finally back in Australia decades later, it is given to another young boy named Jackson. AUTHOR: Krista Bell has been a published author for 22 years, as well as a children's book reviewer on ABC Radio and in print. Jack's Bugle is her 26th title for young readers and her 3rd with Windy Hollow Books, following Peeking Ducks (2010) and Warriors (2012). ILLUSTRATOR: Belinda grew up on Sydney's north shore of Sydney, spending many hours drawing and painting its bushland. She studied fine arts and illustration when she left school, learning the intricacies of drawing, printmaking, sculpture and painting. Later she went on to study illustration at Enmore Design Centre. She has worked as an illustrator creating designs to be used on children's clothing as well as producing illustrations for books. She has painted many murals, some for children, cultural centres, schools and work spaces.