Jerusalem Afflicted: Quaresmius, Spain, and the Idea of a 17th-century Crusade

Description - Jerusalem Afflicted: Quaresmius, Spain, and the Idea of a 17th-century Crusade by Ken Tully

On Good Friday, 1626, Franciscus Quaresmius delivered a sermon in the Church of the Holy Sepulcher in Jerusalem calling on King Philip IV of Spain to undertake a crusade to 'liberate' the Holy Land. Jerusalem Afflicted: Quaresmius, Spain, and the Idea of a 17th-century Crusade introduces readers to this unique call to arms with the first-ever edition of the work since its publication in 1631. Aside from an annotated English translation of the sermon, this book also includes a series of introductory chapters providing historical context and textual commentary, followed by an anthology of Spanish crusading texts that testify to the persistence of the idea of crusade throughout the 17th century.

Quaresmius' impassioned and thoroughly reasoned plea is expressed through the voice of Jerusalem herself, personified as a woman in bondage. The friar draws on many of the same rhetorical traditions and theological assumptions that first launched the crusading movement at Clermont in 1095, while also bending those traditions to meet the unique concerns of 17th-century geopolitics in Europe and the Mediterranean. Quaresmius depicts the rescue of the Holy City from Turkish abuse as a just and necessary cause. Perhaps more unexpectedly, he also presents Jerusalem as sovereign Spanish territory, boldly calling on Philip as King of Jerusalem and Patron of the Holy Places to embrace his royal duty and reclaim what is rightly his on behalf of the universal faithful. Quaresmius' early modern call to crusade ultimately helps us rethink the popular assumption that, like the chivalry imagined by Don Quixote, the crusades somehow died along with the middle ages.

Other Editions - Jerusalem Afflicted: Quaresmius, Spain, and the Idea of a 17th-century Crusade by Ken Tully 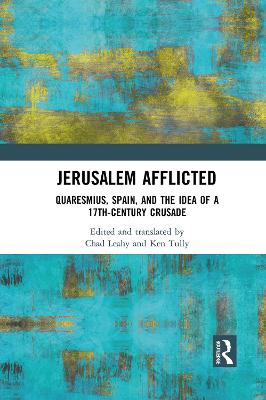 A Preview for this title is currently not available.
More Books By Ken Tully
View All