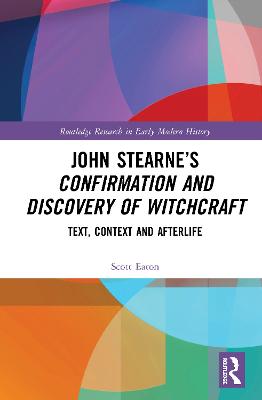 Between 1645-7, John Stearne led the most significant outbreak of witch-hunting in England. As accusations of witchcraft spread across East Anglia, Stearne and Matthew Hopkins were enlisted by villagers to identify and eradicate witches. After the trials finally subsided in 1648, Stearne wrote his only publication, A confirmation and discovery of witchcraft, but it had a limited readership. Consequently, Stearne and his work fell into obscurity until the 1800s, and were greatly overshadowed by Hopkins and his text.

This book is the first study which analyses Stearne's publication and contextualises his ideas within early modern intellectual cultures of religion, demonology, gender, science, and print in order to better understand the witch-finder's beliefs and motives. The book argues that Stearne was a key player in the trials, that he was not a mainstream 'puritan', and that his witch-finding availed from contemporary science. It traces A confirmation's reception history from 1648 to modern day and argues that the lack of research focusing on Stearne has resulted in misrepresentations of the witch-finder in the historiography of witchcraft. This book redresses the imbalance and seeks to provide an alternative reading of the East Anglian witch-hunt and of England's premier witch-hunter, John Stearne.

A Preview for this title is currently not available.
More Books By Scott Eaton
View All