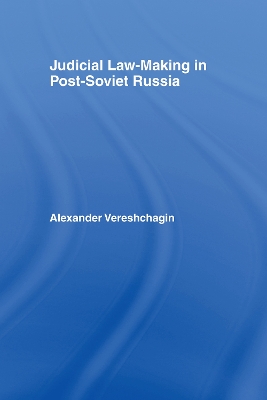 A novel and incisive investigation of the role of judicial precedents and customs in Russian law, this book examines the trends in the development of judge-made law in Russian civil law since the demise of the Soviet Union.

Exploring the interrelated propositions that a certain creative element is intrinsic to the judicial function in modern legal systems, which are normally shaped by both legislators and judges and that the Russian legal system is not an exception to this rule, the author argues that the rejection or acceptance of judge-made law can no longer be sufficient grounds for distinguishing between common law and civil law systems for the purposes of comparative analysis.

Divided into six chapters, it covers:

Estimating the degree of creativity within different branches of the Russian judiciary and explaining the difference in the approaches of various courts as well as setting-out proposals as to how the discrepancies in judicial practice can be avoided, Judicial Law-Making in Post-Soviet Russia is invaluable reading for all students of international law, comparative law, legal skills, method and systems and jurisprudence and philosophy of law. A Preview for this title is currently not available.
More Books By Alexander Vereshchagin
View All