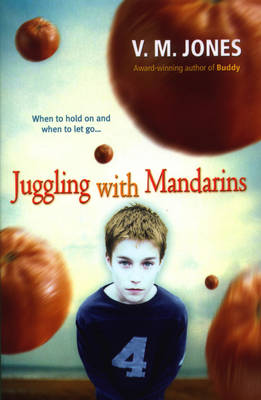 Pip's just your average teenage boy. Lives at home with his older brother, little sister, mum and dad. Plays in the local soccer team, though not very well, and is absolutely mortified every time his dad turns up to watch, because his dad, well, he does have a tendency to shout. Loudly. two, three, four - how many mandarins can Pip juggle? A coming-of-age novel about Pip, whose father wants him to be everything that Pip is not. Pip is good at English, like his mother; but Pip's father wants him to be a soccer star like Nick, Pip's brother, and to win at any cost. When Pip's English teacher challenges her students to learn how to juggle three balls, Pip is determined that he will do better than that. He sets his sights high and finally learns how to juggle not three balls, but five mandarins. Along the way, he also finds the courage to confront his father and express his anger and resentment - to publicly claim the right to be his own person and live his life on his own terms. Juggling with Mandarins is a novel about growing up. It asserts the importance of living life on your own terms, and of competing for enjoyment rather than reward. It explores the complex love-hate relationship between a father and son, and the sometimes painful process of realising that parents are, after all, only human. Ages 12+