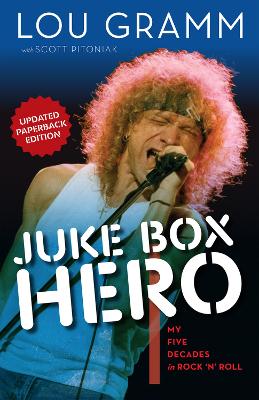 Lou Gramm rose from humble, working-class roots in Rochester, New York, to become one of rock's most popular and distinctive voices in the 1970s and '80s, singing and cowriting more than a dozen hits with the band Foreigner. Songs such as Cold As Ice, I Want to Know What Love Is, and Midnight Blue are among 20 Gramm songs that achieved Top 40 status on the Billboard charts and became rock classics still played often, nearly three decades after they first hit the airwaves and the record store shelves.

Juke Box Hero: My Five Decades in Rock 'n' Roll chronicles, with remarkable candour, the ups and downs of this popular rocker's amazing life which saw him achieve worldwide fame and fortune, then succumb to its trappings before summoning the courage and faith to overcome his drug addiction and a life-threatening brain tumour. Gramm takes the reader behind-the-scenes into the recording studio, back stage, on the bus trips and beyond to give an insider's look into the life of the man Rolling Stone magazine referred to as 'the Pavarotti of Rock'.

A Preview for this title is currently not available.
More Books By Lou Gramm
View All