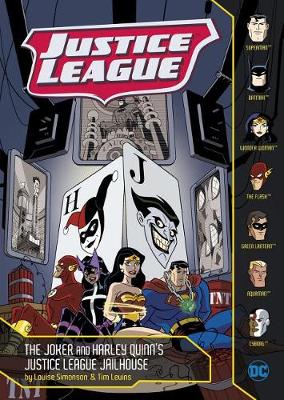 When the forces of evil strike, the World's Greatest Super Heroes unite to meet the challenge. Join Batman, Superman, Wonder Woman, and the rest of the Justice League in their quest to save the Earth - and beyond - from the sinister schemes of the universe's worst super-villains! With original artwork by DC Comics illustrators, these full-colour chapter books will captivate young readers. With the help of a nefarious billionaire, the Joker and Harley Quinn hatch a plan to lock up the Justice League for good. First they'll kidnap The Flash and Huntress. Then they'll lure the Justice League's most powerful members - including Batman, Superman, and Wonder Woman - into a trap beneath Arkham Asylum. Can the world's greatest team of super heroes thwart the Joker and Harley before it's too late? Or will this perilous pair doom them forever in a Justice League jailhouse? AGES: 9 to 12 AUTHOR: Louise Simonson writes about monsters, science fiction and fantasy characters, and superheroes. She wrote the award-winning Power Pack series, several best-selling X-Men titles, Web of Spider-man for Marvel Comics, and Superman: Man of Steel and Steel for DC Comics. She has also written many books for kids. She is married to comic artist and writer Walter Simonson and lives in the suburbs of New York City. SELLING POINTS: Brings together DC Comic's most popular super heroes and super villains Provides a fast-paced action adventure in chapter book format with full-color illustrations Comparable to the very popular DC chapter book series such as The Dark Knight and The Man of Steel Written and Illustrated by DC-approved authors and illustrators