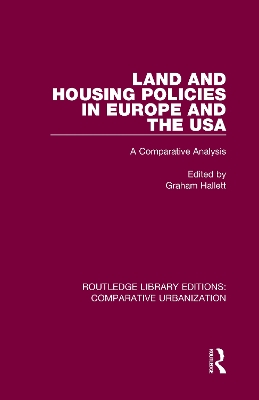 Land and Housing Policies in Europe and the USA: A Comparative Analysis

Description - Land and Housing Policies in Europe and the USA: A Comparative Analysis by Graham Hallett

Originally published in 1988, this book concentrates on urban land policy and was particularly significant when it was originally published because the 1980s were an era when the rich were getting richer and the poor poorer and in which changes in the ownership of and access to real estate contributed to this polarisation. The book focusses on some core topics, namely: The buying, selling and holding of land by public agencies; the land market, including the impact of taxation and subsidisation; the control of the land market through town planning controls. There are chapters devoted to urban land policy in the former West Germany, The Netherlands, France, the former Yugoslavia, the UK and USA.

Buy Land and Housing Policies in Europe and the USA: A Comparative Analysis by Graham Hallett from Australia's Online Independent Bookstore, BooksDirect.

A Preview for this title is currently not available.
More Books By Graham Hallett
View All