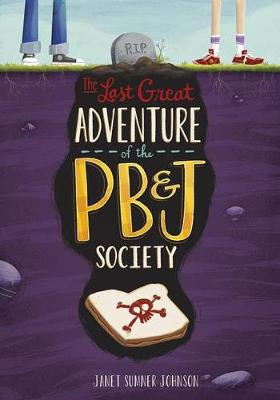 Last Great Adventure of the PB and J Society

Description - Last Great Adventure of the PB and J Society by Johnson,,Janet Sumner

When her best friend's house is threatened with foreclosure, young Annie Jenkins is full of ideas to save the home: selling her appendix on eBay, winning the lottery, facing down the bankers . . . anything to keep Jason from moving. But Jason's out-of-work dad blows up at the smallest things, and he's not very happy with Annie's interventions, which always seem to get them into more trouble. But when Annie tracks a lost treasure to Jason's backyard, she's sure the booty will be enough to save Jason's family. Pirate treasure in the Midwest seems far-fetched, even to Annie, but it could be the answer to all their problems. Now all she has to do is convince Jason. As the two hunt for answers and the pressure gets to Jason and his family, Annie discovers that the best-laid plans aren't always enough and there are worse things than moving away. AUTHOR: Janet Sumner Johnson lives in Oregon with her husband and three kids. She bakes a mean cinnamon twist and eats way more cookies than are good for her, which explains her running habit. Though her full-time occupation as evil tyrant/benevolent dictator (aka Mom) takes most of her time, she sneaks in writing at night when her inner funny bone is fully unleashed.

Other Editions - Last Great Adventure of the PB and J Society by Johnson,,Janet Sumner