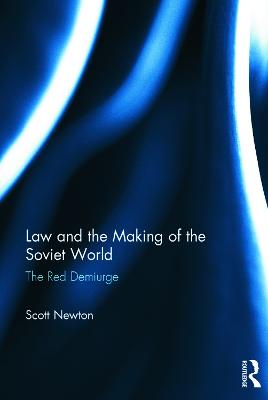 Law and the Making of the Soviet World

This book is an unconventional reappraisal of Soviet law: a field that is ripe for re-evaluation, now that it is clear of Cold War cobwebs; and, as this book shows, one that is surprisingly topical and newly compelling. Scott Newton argues here that the Soviet order was a work of law. Drawing on a wide range of sources - including Russian-language Soviet statues and regulations, jurisprudence, legal theory, and English-language 'legal Kremlinology' - this book analyses the central significance of law in the design and operation of Soviet economic, political, and social institutions. In arguing that it was an exemplary, rather than aberrant, case of the uses to which law was put in twentieth-century industrialised societies, Law and the Making of the Soviet World: The Red Demiurge provides an insightful account of both the significance of modern law in the Soviet case and the significance of the Soviet case for modern law.

Buy Law and the Making of the Soviet World by Scott Newton from Australia's Online Independent Bookstore, BooksDirect.

A Preview for this title is currently not available.
More Books By Scott Newton
View All