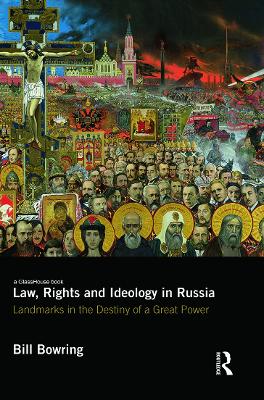 Law, Rights and Ideology in Russia

Landmarks in the Destiny of a Great Power

Description - Law, Rights and Ideology in Russia by Bill Bowring

Law, Rights and Ideology in Russia: Landmarks in the destiny of a great power brings into sharp focus several key episodes in Russia's vividly ideological engagement with law and rights. Drawing on 30 years of experience of consultancy and teaching in many regions of Russia and on library research in Russian-language texts, Bill Bowring provides unique insights into people, events and ideas.

The book starts with the surprising role of the Scottish Enlightenment in the origins of law as an academic discipline in Russia in the eighteenth century. The Great Reforms of Tsar Aleksandr II, abolishing serfdom in 1861 and introducing jury trial in 1864, are then examined and debated as genuine reforms or the response to a revolutionary situation. A new interpretation of the life and work of the Soviet legal theorist Yevgeniy Pashukanis leads to an analysis of the conflicted attitude of the USSR to international law and human rights, especially the right of peoples to self-determination. The complex history of autonomy in Tsarist and Soviet Russia is considered, alongside the collapse of the USSR in 1991. An examination of Russia's plunge into the European human rights system under Yeltsin is followed by the history of the death penalty in Russia. Finally, the secrets of the ideology of 'sovereignty' in the Putin era and their impact on law and rights are revealed. Throughout, the constant theme is the centuries long hegemonic struggle between Westernisers and Slavophiles, against the backdrop of the Messianism that proclaimed Russia to be the Third Rome, was revived in the mission of Soviet Russia to change the world and which has echoes in contemporary Eurasianism and the ideology of sovereignty.

Other Editions - Law, Rights and Ideology in Russia by Bill Bowring A Preview for this title is currently not available.
More Books By Bill Bowring
View All