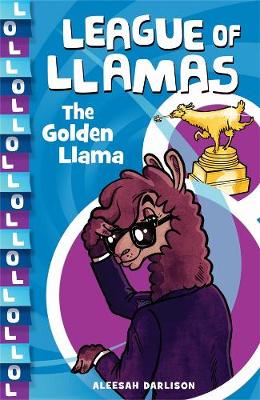 League of Llamas 1: The Golden Llama

Description - League of Llamas 1: The Golden Llama by Aleesah Darlison

Forget finding the elusive Fortnite llama or taming your Minecraft llama - 2020 is the year of the League of Llamas!
The League of Llamas (LOL) are a group of secret llama agents and they're on a mission to save the world - if only Agent 0011 Phillipe Llamar could stop looking in the mirror at his luxurious fringe and Agent 0013 Lloyd Llamanator could resist the temptation to eat everything in his path! There's also the thieving General Bottomburp to contend with and a mysterious lady llama in red.

Can Phillipe and Lloyd foil the evil plans of Bottomburp and his badger henchmen? The fate of the Llama Republic's most prized relic, the Golden Llama, depends on it!