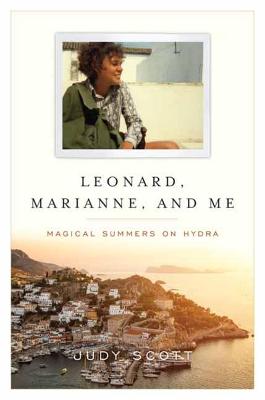 Leonard, Marianne, and Me: Magical Summers on Hydra

Description - Leonard, Marianne, and Me: Magical Summers on Hydra by Judy Scott

In 1973, Judy Scott was intent on traveling to Istanbul, but serendipitously she stumbled onto the incomparable Greek island of Hydra and the people who would continue, over many subsequent visits, to enhance and influence her life ever after.

This memoir, based on notebooks and journals Scott kept during various times and visits to her favorite place on earth, recounts in very intimate detail her interactions and developing relationships with singer/songwriter Leonard Cohen and his beautiful muse and "love of his life" Marianne Ihlen.

As Leonard himself observed of this book when Scott sent the manuscript to him for his approval: "I particularly admire the detail and honesty of the piece." One of the more unique features in this recounting is the emerging acknowledgment the author confronts of her own sexuality, as she recounts: "It did not take long for Leonard to recognize that I was more attracted to Marianne than I was to him, though I came to love him too in the end."

And indeed it was Marianne herself, who sought out and fostered Scott's interest and affection. After a shocking interlude at Marianne's 38th birthday party, Scott writes: "After that, my life on Hydra was all about Marianne." But it was Leonard's interest, his kindness and generosity that signified her lifelong love and respect for the real private person who was Leonard Cohen. Robert Kory, Leonard's executor, told Scott when they met to discuss several edits the Cohen family had requested: "Your story details a side of Leonard and a phase in his life that no other biography or coverage of the public person he was captures. And it lovingly depicts and lets me see the person he was at 38, long before I made his acquaintance and got to experience the musical and literary genius, and whose legacy I'm now dedicated to preserving."

The book also goes into a detailed description of Hydra in the early 1970s. A unique place filled with astonishing physical beauty and an incomparable atmosphere of serenity and peaceful energy. Hydra is the only inhabited Greek island with no cars (they are forbidden), no automotive transportation at all. All the roads on the three large hills that circle the small deep-water yacht port contain stairs or steps that make traversing by wheeled vehicles impossible. This absence of gas-powered vehicles and motors was also the reason Hydra attracted so many artists; it was the light, the unfiltered magical "Greek light" absent noxious fumes that presented some of the purist images on earth.

The island also contained a small foreign community of like-minded creative souls, artists, musicians, writers and their supporters and admirers. As Scott explains: "Hydra in the late '60s early '70s was at its creative zenith. Like Paris in the '30s, Harlem in the '40s, Greenwich Village in the '50s, San Francisco in the '60s-Hydra in the '70s was the place to be."

The memoir, though it centers on her most important, most impactful interactions with Leonard and Marianne, also contains several portraits of other Hydra habitues, all members of the same small ex-pat community, all close friends (and occasional lovers) of Leonard and Marianne, all uniquely interesting in their own right. From George Lialios, the wealthy Greek man the book is dedicated to (whom Scott met first on the island and who introduced her to all the others contained in these pages) to Alexis Bolens, the Swiss/Greek handsome lothario, who'd worked as a mercenary in Rhodesia and a plantation manager in South Africa, from Lindsey Callicoatt, the writer, artisan and most beloved of all the foreign community, to George Slater, irascible poet, sea captain and brilliant curry maker-there are many characters who all contributed to the "Hydra family" that Scott lovingly recalls.

This book is both a story of a special time, place and cast of characters-a travelogue of an enchanted island as it was back then and still is to this day, backlit by the glow of Leonard Cohen and his muse, Marianne.

A Preview for this title is currently not available.
More Books By Judy Scott
View All