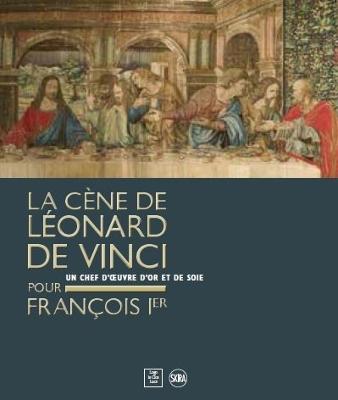 For the first time since its restoration, the copy of the Last Supper by Leonardo da Vinci, a tapestry made between 1505 and 1510, commissioned by Louise de Savoie and Francois, Duke of Angouleme, future king of France, is unveiled to the public. The tapestry, a monumental work of 6.5m x 9m, preserved in the Vatican Museums, was probably woven in Flanders by a Lombard artist, such as Bramantin or Marcod'Oggiono, artists known to have painted, as early as 1503, copies of the Leonardo's fresco. The tapestry represents one of the first copies of the masterpiece intended for the French court and testifies to the admiration of the kings of France for the artist.This book will also highlight the previous relationship between Louis XII's court and the Italian master and his disciples, such Andrea Solario, Andrea del Sarto and Bernadino de Conti.

The essays will also focus on Leonardo da Vinci's journey to and stay in France, through some copies of his most famous paintings and prints, prints and watercolors. Specialists in both Leonard's art and the tapestry of the sixteenth and seventeenth centuries shed light on the provenance and making of this work, as well as it's meticulous restoration.

A Preview for this title is currently not available.
More Books By Pietro Marani
View All