This book comprises 14 essays by scholars who disagree about the methods and purposes of comparing Nazism and Communism. The central idea is that if these two different memories of evil were to develop in isolation, their competition for significance would distort the real evils both movements propagated. Whilst many reject this comparison because they feel it could relativize the evil of one of these movements, the claim that a political movement is uniquely evil can only be made by comparing it to another movement. This book is made up of several debates. The first concerns the different receptions of Nazism and Communism. Do we have greater knowledge about Nazi atrocities than about Communist atrocities, and has that coloured our judgement? Or have Communism's atrocities been well-known for a long time, and has some greater attention been paid to Communist than to Nazi atrocities? Another debate presented here is about whether people can behave rationally in the contexts of great wickedness. Can victims behave 'rationally'? What does it mean to claim that perpetrators are 'rational'? Was the Communist world view more 'rational' than the Nazi world view?
Or did the Communists' supposed greater 'rationality' induce them to create an even more imaginary system? Did the Nazis' allegedly greater irrationality make their acts more heinous? How do these issues affect postwar interrelations between memory and history? Are there tensions between the ways postwar societies' remember these atrocities, and the ways in which intellectuals and scholars reconstruct what happened? Nazism and Communism have been constantly compared since the 1920s. A sense of the ways in which these comparisons have been used and abused by both Right and Left belongs to our common history. These twentieth century evils invite comparison, if only because of their traumatic effects. We have an obligation to understand what happened, and we also have an obligation to understand how we have dealt with it.

Other Editions - The Lesser Evil by Helmut Dubiel 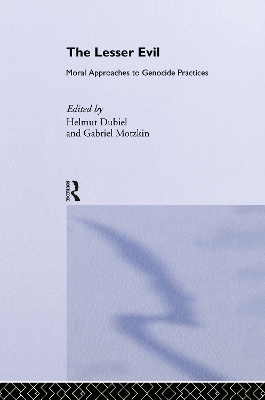 A Preview for this title is currently not available.
More Books By Helmut Dubiel
View All