Letters of Sir Robert Moray to the Earl of Kincardine, 1657-73

Description - Letters of Sir Robert Moray to the Earl of Kincardine, 1657-73 by David Stevenson

Sir Robert Moray (1608-1673) was one of the most active of the twelve founding members of the Royal Society, and as a close friend of King Charles, was a key figure in obtaining the royal patronage that was crucial to its status and growth. Whilst not an active or original researcher, Moray's role as enthusiastic and widely read participant in, and inspirer of, the Society's activities, place him at the centre of the seventeenth-century British scientific scene. As well as being an active member of the Royal Society, Moray was a prolific letter writer, sending a steady stream of news and correspondence to his friend Alexander Bruce, Earl of Kincardine, whose ill-health often kept him away from events. Providing a complete modern edition of the letters written between 1657 and 1673, this collection offers a unique insight into the attitudes and aspirations of the early scientific community. Ranging widely across a broad range of subjects, including medicine, magnetism, horology, politics, current affairs, the coal and salt industries, fishing, freemasonry, literature, heraldry and symbolism, the letters display Moray's knowledge of a formidable range of subjects and authors. As well as being a lively example of the letter writers art, they are a rich source for anyone with an interest in early modern medical and scientific history, as well as those investigating the broader social and cultural milieu of Restoration society.

Buy Letters of Sir Robert Moray to the Earl of Kincardine, 1657-73 by David Stevenson from Australia's Online Independent Bookstore, BooksDirect.

Other Editions - Letters of Sir Robert Moray to the Earl of Kincardine, 1657-73 by David Stevenson 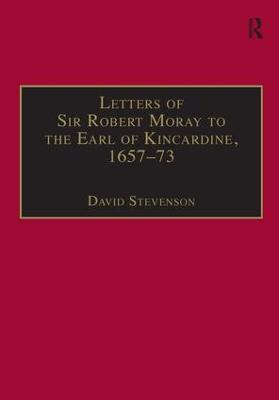 A Preview for this title is currently not available.
More Books By David Stevenson
View All

The Ultimate ETF Guidebook: A Comprehensive Guide to the World of Exchange Traded Funds - Including the Latest Innovations and Ideas for ETF Portfolios
David Stevenson
Hardback , Feb '19
RRP: $86.80 $78.12