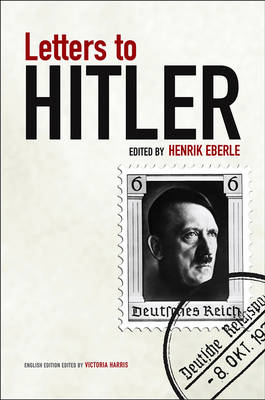 Between 1925 and 1945 thousands of ordinary Germans of both sexes and all ages wrote letters to Hitler. Lost for decades, a large cache of these letters was recently discovered in the KGB Special Archive in Moscow, having been carted off to Russia by the Soviet Secret Police at the end of the war.
The letters range from gushing love letters - 'I love you so much. Write to me, please,' this from a seven-year old girl named Gina - to letters from teachers, students, priests, businessmen and others expressing gratitude for alleviating poverty or restoring dignity to the German people. There are a few protest letters and the occasional desperate plea to release a loved one from a concentration camp, but the overwhelming majority are positive and even rapturous, shedding fresh light on the nature of the Hitler cult in Nazi Germany.
This volume is the first publication of these letters in English. It comprises a selection of the letters and includes a contextualizing commentary that explains the situation of each writer, how the letter was dealt with and what it tells us about Nazi Germany. The commentary also describes the bureaucratic procedures that evolved to deal with the correspondence (Hitler never read any of it), which ranged from warm thanks to referral to the Gestapo.

A Preview for this title is currently not available.
More Books By Henrik Eberle
View All