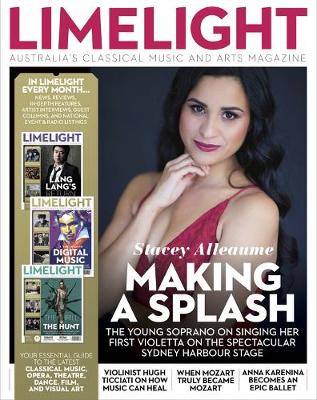 Cover story- Making a Splash- Australian-Mauritian soprano Stacey Alleaume, is a star in the making. We trace her rapid rise at Opera Australia as she makes her debut as Violetta in La Traviata for Handa Opera on Sydney Harbour, performing in one of Australia's most spectacular outdoor venues.

Opus- Mozart composed his Piano Concerto No 9 when he was just 21. French pianist Jean-Efflam Bavouzet and British conductor Ben Gernon discuss the composition, which Alfred Einstein famously dubbed "Mozart's Eroica" as they prepare to perform it with the Adelaide Symphony Orchestra.

Feature- Music to Heal. Early in his career English violinist Hugh Ticciati suffered such tension that the resulting pain forced him to stop playing. Meditation, yoga and meditative music enabled his rehabilitation and allowed him to perform again. He discusses mindfulness, wellbeing and the restorative powers of music as he directs an emotionally charged program for the Australian Chamber Orchestra.

Article- Anna Karenina en pointe. Yuri Possokhov, who choreographed the controversial Nureyev for the Bolshoi, tells us about his epic, new ballet, Anna Karenina, based on Tolstoy's immortal novel, which The Australian Ballet performs for the first time this month.

What's on- live performance and radio highlights for April 2020.