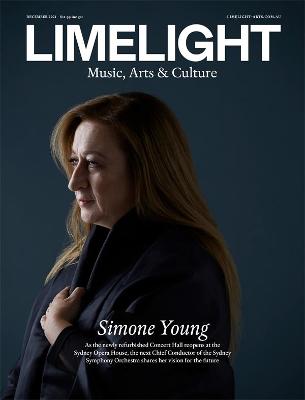 Cover story- Young Blood In 2022 Simone Young will ascend the podium as the next Chief Conductor of the Sydney Symphony Orchestra and inaugurate the Sydney Opera House's newly refurbished Concert Hall. We talk to the
Australian Maestra about what it means for the orchestra to return home after two years in exile, what audiences can expect from the Hall's new acoustics, and her vision for the SSO's future.

Feature- Neil Armfield makes his debut with Pinchgut Opera, directing Rameau's comic masterpiece Platee. The director takes us inside the twisted humour of an opera about an ugly marsh nymph, written for the marriage
of the Dauphin Louis XV to the Princess Maria Teresa of Spain, and why the piece remains so enchanting today.

Article- It wouldn't be Christmas without Handel's choral masterpiece Messiah, but what is it about this music that commands such intense devotion? We talk to the amateur singers who make it a yearly ritual and the 'Messiah Chasers' who travel around the country eager to catch every performance.

Interview- Sydney Theatre Company's Artistic Director Kip Williams tells us about his new production of Julius Caesar and why Shakespeare's play about one of history's greatest power struggles remains alarmingly relevant amidst the tumult of the 21st century.

On Stage, On Air & Online- We preview the live performances, digital events, cinema screenings, and radio highlights to look out for this month.