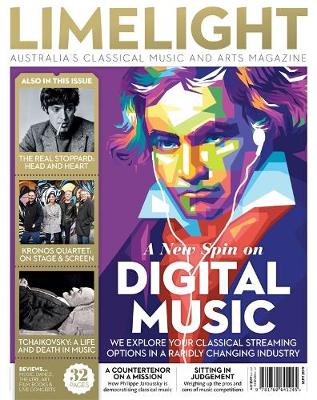 Cover story- Tom Stoppard- The Real Thing. We examine the 50-year career of the mercurial playwright, whose dazzling wordplay gave rise to the term 'Stoppardian'. Sydney Theatre Company performs his play The Real Thing this month, featuring a playwright not unlike Stoppard himself, while in November, Sydney Symphony Orchestra performs Every Good Boy Deserves Favour, his ingenious play for actors and orchestra, written with Andre Previn.

Feature- An exploration of Elgar's Enigma Variations, which the composer dedicated "to my friends pictured within". Each initialised variation is a musical sketch of a close friend. But what about the rumoured hidden melody? Ryan Wigglesworth conducts the piece for Melbourne Symphony Orchestra.

Article- Join us as we enter the unsettling world of Aribert Reimann's 1984 opera, Ghost Sonata, based on Strindberg's evocative, moody play, which Opera Australia presents in Sydney and Melbourne.
Interviews- Rising star, 11-year old Melbourne violinist Christian Li, as he prepares to play with the Australian Brandenburg Orchestra and the Sydney Symphony Orchestra; and Australian composer Gordon Kerry on his new Clarinet Quintet for Omega Ensemble.

What's on- live performance and radio highlights for September 2019.