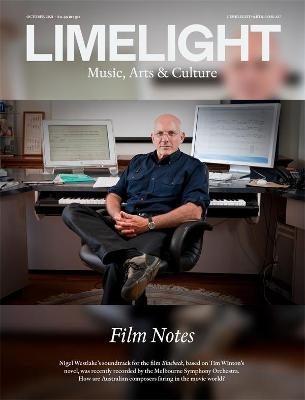 Cover story- Film Notes- ABC Classic recently recorded the Melbourne Symphony Orchestra playing Nigel Westlake's soundtrack for the film Blueback, based on Tim Winton's novel. We talk to Westlake and other Australian classical composers including Caitlin Yeo and Jessica Wells about the state of Australian film composition, and what makes an effective movie score.

Feature- Completing the Circa- Brisbane-based contemporary circus company Circa has worked on operas, classical concerts and with animation studio Aardman, as well as creating its own internationally acclaimed productions. This month marks its fourth collaboration with the Australian Brandenburg Orchestra. Artistic Director Yaron Lifschitz discusses pushing and spinning the boundaries of contemporary Australian circus.

Article- Songwriters Gina Williams and Guy Ghouse take us behind the scenes of their new opera Koolbardi wer Wardong, which West Australian Opera premieres this month. Performed in the Noongar language, it is based on the traditional story about the rivalry between the koolbardi (magpie) and the wardong (crow).

On Stage, On Air and Online- We preview live performances, livestreams, cinema screenings, digital events and radio highlights to look out for this month.