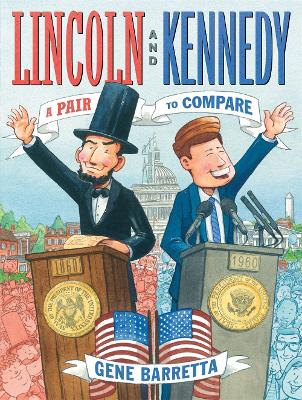 An insightful picture book biography comparing two of our nation's most popular presidents.
President Abraham Lincoln grew up in a one-room log cabin. President John F. Kennedy was raised in the lap of luxury. One was a Republican and one a Democrat. They lived and served a hundred years apart.

Yet they had a number of things in common. Some were coincidental: having seven letters in their last names. Some were monumental: Lincoln's support for the abolitionist movement and Kennedy's support for the civil rights movement. They both lost a son while in office. And, of course, both were assassinated.

In this illuminating book, Gene Barretta offers an insightful portrait of two of our country's most famous presidents