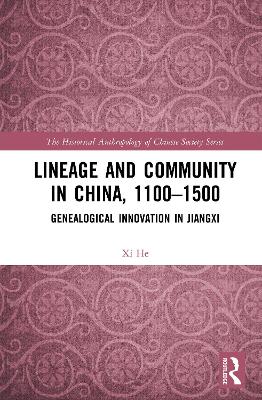 Lineage and Community in China, 1100-1500: Genealogical Innovation in Jiangxi

Description - Lineage and Community in China, 1100-1500: Genealogical Innovation in Jiangxi by Xi He

Tracing descent from common ancestors was extremely important in imperial China. Members of such lineage communities sacrificed to ancestors in periodic ceremonies, maintained written genealogies to demonstrate their descent, and held some properties in common. This book, based on extensive original research, provides evidence that the practice originated much earlier than previously understood. It shows that in the eleventh century, in southern China under the Song dynasty, the method of compiling a genealogy in the form a table, that is, to say a family tree, replaced its statement as a textual paragraph and that this allowed the tracking of multi-line descent in ways that had previously been impossible. The book also reveals that the practice of recording and presenting genealogical information was not originally unique to communities of common surnames, but that the Southern Song government, keen to encourage loyalty to the state and cohesion within communities, favoured the building of common surname lineages, a practice which then had far-reaching consequences for the nature of Chinese society over a very long period.

Buy Lineage and Community in China, 1100-1500: Genealogical Innovation in Jiangxi by Xi He from Australia's Online Independent Bookstore, BooksDirect.

A Preview for this title is currently not available.
More Books By Xi He
View All