One POW's Journey of Escape and Evasion

The son of a World War I veteran, Charles Granquist was 17 when war was declared with Germany in 1939. He lied about his age, joined the infantry and was sent to Egypt. Like so many other young men at the time, Granquist did not know what to expect. All he really cared about was doing his duty and serving his country. He never even contemplated his chances of becoming a prisoner of war - he was there to fight and take prisoners. Captured by the Germans in Greece, Granquist was determined to continue carrying the war to his captors "any way I could." In his memoir, A Long Way Home, he describes his shame at becoming a POW and how he believed he had failed himself, his mates and as a soldier. He orchestrated a remarkable five escape attempts, all of which ended unsuccessfully. Yet Charles refused to give up, determined to fulfil his duty as an Aussie Digger and make his own small contribution to the war effort.
His story takes the reader on the rollercoaster of escape, recapture and 196 days of solitary confinement before his eventual return home with his Russian war bride. Granquist' s account of his wartime experiences adds another important chapter to the story of World War II POWs, while showcasing the spirit, humour, persistence and ingenuity expected of an Aussie Digger. A Long Way Home is tribute to one veteran's spirit and the mateship he still holds so dear today. 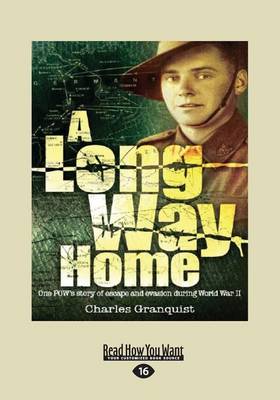 A Preview for this title is currently not available.
More Books By Charles Granquist
View All