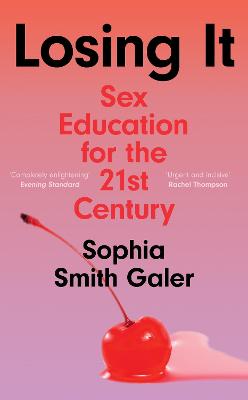 Losing It: Sex Education for the 21st Century

Description - Losing It: Sex Education for the 21st Century by Sophia Smith Galer

'It's the kind of book that makes you wonder, 'why wasn't this written before?' It could change lives' EVENING STANDARD

'Turns everything you've been taught about sex on its head'
RUBY RARE
An urgent, myth-busting book that dismantles sex misinformation and reimagines sexual freedom for today.

Clueless about everything from her own anatomy to relationships, Sophia Smith Galer's sex education classes left her with more questions than answers. But what she didn't know was that this lack of knowledge was about to turn her life upside down - as it does to countless people in the UK every year.

Thanks to inadequate sex education, many of us are finishing school knowing more about STDs and condoms than the bigger sexual picture - our own physicality, pleasure and consent. And the effects can last a lifetime.

In Losing It, Smith Galer shares the eye-opening stories of ordinary people affected by sex misinformation and finds that many of us are unable to access the world of sexual freedom that we've been promised. She draws on her own experiences - and the expertise of a new generation of sex educators - to uncover a world that subscribes to a wide catalogue of sex myths. This book tackles:

* The Virginity Myth: Does having sex for the first time alter us biologically?

* The Sexlessness Myth: Who is abstaining and why?

* The Virility Myth: Why do men feel so much pressure to have sex?

* The Consent Myth: Is there more to it than just saying no?

Losing It challenges the status quo and empowers people from all backgrounds and any age to rewrite the story of their sex lives.

Other Editions - Losing It: Sex Education for the 21st Century by Sophia Smith Galer A Preview for this title is currently not available.
More Books By Sophia Smith Galer
View All