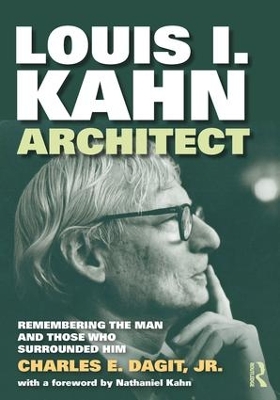 Remembering the Man and Those Who Surrounded Him

Few people in the history of art and architecture have planted a seed of inspiration that grew to become a towering oak of lasting influence. There are those, particularly colleagues and students of Louis I. Kahn, who would say that he was one of these people. Certainly Kahn was one of the foremost architects of the twentieth century, designing such famous landmarks as the National Assembly Building in Dhaka, Bangladesh; the Salk Institute in La Jolla, California; and the Kimbell Museum in Fort Worth, Texas.

In this commemorative volume, Charles E. Dagit, Jr. shows the power and influence that Kahn displayed at the University of Pennsylvania department of architecture in the 1960s. Since Dagit knew Kahn personally, this is a factual history as well as a glimpse into Kahn's personal wisdom and humanity.

Beginning with a prelude that starts with the author's undergraduate years at the University of Pennsylvania, Dagit launches readers on an intellectual journey of how he first met Kahn. From there he details his experiences with Kahn and explores Kahn's interactions with Penn faculty members, including Mario Romanach, Robert LeRicolais, and Aldo Giurgola. This first-hand account sheds fascinating new light on one of the most prominent architects of the twentieth century. A Preview for this title is currently not available.
More Books By Charles E. Dagit
View All