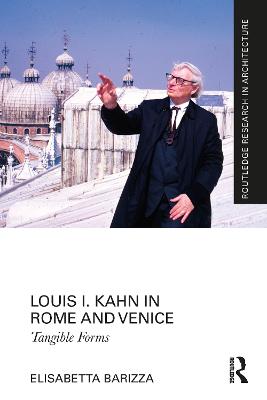 Louis I. Kahn in Rome and Venice: Tangible Forms

Description - Louis I. Kahn in Rome and Venice: Tangible Forms by Elisabetta Barizza

This book examines the idea of organism in the work of Louis I. Kahn, from the turning point of Rome to the project for Venice. It presents an original interpretation of the work of Kahn during one of the most fruitful periods of his career, when he was working on a particular design method based on an entirely novel way of interacting with the past. Beginning with a meticulous documentation and analysis of Kahn's experiences in the twenty years from 1930 to 1950, the book sheds new light on the relationship between Kahn's work and the modern movement. The arguments are supported by case studies, including that of the Palazzo dei Congressi in Venice based on Kahn's words (like his lessons in Venice at IUA, International University of Art, in 1971) and others as the Trenton Bath House, the Salk Institute (La Jolla), the Kimbell Museum (Fort Worth), the Yale Gallery and the Mellon Center for British Art (New Haven) and more.

Unlike much of the by now well-established literature on Kahn's work, Louis I. Kahn in Rome and Venice suggests that the basic premise of Kahn's invention is the idea of spatial, constructive organism, which explains how he created forms that were inextricably anchored in the past, without imitating any one kind of ancient architecture. The main objective of the book is to explain Kahn's methodology to architects and students, showing how he was able to design an architectural object with the characteristics of the best designed objects: organisms, in which each part contributes, with the whole, to creating "something made of indivisible parts".

A Preview for this title is currently not available.
More Books By Elisabetta Barizza
View All