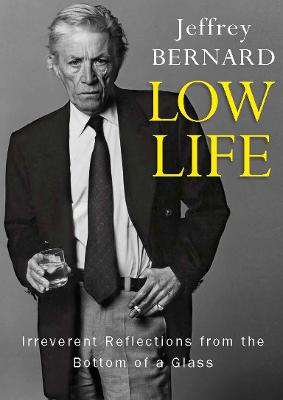 Low Life - Irreverent Reflections from the Bottom of a Glass

The complete collection of Jeffrey Bernard's infamous Low Life columns now available in a single volume. Described as the Tony Hancock of journalism, for forty years Bernard wrote only about himself and the failures of his life with women, drink, doctors, horses which have become legendary. Low Life is an irresistible collection of the best of Bernard's celebrated autobiographical contributions to The Spectator once described as 'a suicide note in weekly instalments'. Previously published in two volumes entitled Low Life: A Kind of Autobiography and Reach for the Ground, these books are now available in a single volume containing all his derisive reflections on life. Antiauthoritarian, grumpy, charming, politically incorrect, funny, drunk and always mischievous, Bernard could usually be found at the Coach and Horses pub on London's Greek street, a lit cigarette in his mouth and a drink in hand. He was joined by famous friends including Francis Bacon, Lucian Freud, Graham Green, Peter O'Toole, Ian Fleming and many others and their conversations as well as with whomever was tending bar at the time served as the basis for his writing. There were in fact times when he was too drunk to write, hence the famous "unwell" notice that went next to the large, hastily-sketched cartoon that filled its space in the magazine. AUTHOR: Jeffrey Bernard's (1932-1997) column in the Spectator, which began in 1978, chronicled his various medical, alcoholic and sexual adventures, invariably with wit and honesty. His unconventional lifestyle attracted the attention of Keith Waterhouse, who turned his life story into a hit play called Jeffrey Bernard is Unwell. He famously vomited on the Queen Mother's feet at the Royal Ascot and later collapsed drunkenly, unable to deliver his speech at the national point-to-point dinner.