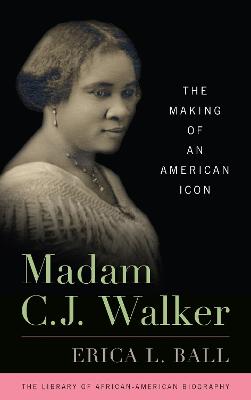 Madam C.J. Walker: The Making of an American Icon

Madam C. J. Walker-reputed to be America's first self-made woman millionaire-has long been celebrated for her rags-to-riches story. Born to former slaves in the Louisiana Delta in the aftermath of the Civil War, married at fourteen, and widowed at twenty, Walker spent the first decades of her life as a laundress, laboring in conditions that paralleled the lives of countless poor and working-class African American women. By the time of her death in 1919, however, Walker had refashioned herself into one of the most famous African American figures in the nation: the owner and president of a hair-care empire and a philanthropist wealthy enough to own a country estate near the Rockefellers in the prestigious New York town of Irvington-on-Hudson. In this biography, Erica Ball places this remarkable and largely forgotten life story in the context of Walker's times. Ball analyzes Walker's remarkable acts of self-fashioning, and explores the ways that Walker (and the Walker brand) enabled a new generation of African Americans to bridge the gap between a nineteenth-century agrarian past and a twentieth-century future as urban-dwelling consumers.

A Preview for this title is currently not available.
More Books By Erica L. Ball
View All