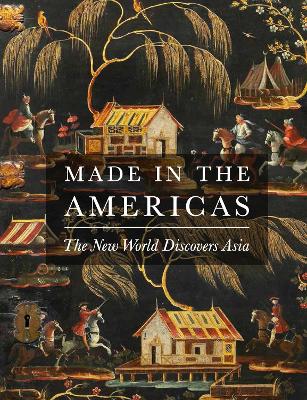 Made in the Americas

Description - Made in the Americas by Dennis Carr

Made in the Americas reveals the largely overlooked history of the profound influence of Asia on the arts of the colonial Americas. Beginning in the 16th century, European outposts in the New World, especially those in New Spain, became a major nexus of the Asia export trade. Craftsmen from Canada to Peru, inspired by the sophisticated designs and advanced techniques of these imported goods, combined Asian styles with local traditions to produce unparalleled furniture, silverwork, textiles, ceramics, lacquer, painting, and architectural ornaments. Among the exquisite objects featured in this book, from across the hemisphere and spanning the 17th to the early 19th centuries, are folding screens made in Mexico, in imitation of imported Japanese and Chinese screens; blue-and-white talavera ceramics copied from Chinese porcelains; luxuriously woven textiles, made to replicate fine silks and cottons from China and India; devotional statues that adapt Buddhist gods into Christian saints; and japanned furniture produced in Boston that simulates Asian lacquer finishes. The stories these objects tell, compellingly related by leading art historians, bring to life the rich cultural interchange and the spectacular arts of the first global age.

Buy Made in the Americas by Dennis Carr from Australia's Online Independent Bookstore, BooksDirect.

A Preview for this title is currently not available.
More Books By Dennis Carr
View All