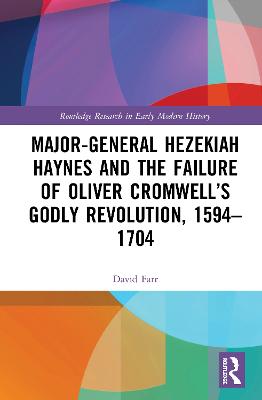 Hezekiah Haynes was shaped by the Puritanism of his father's network and experienced emigration to New England as part of a community removing themselves from Charles I's Laudianism. Returning to fight in the British Civil Wars, Haynes rose to become Cromwell's ruler of the east of England, tasked with bringing about a godly revolution, and in rising to prominence he became the centre of his own developing political and religious network, which included a kin link to Cromwell himself. As one of Cromwell's Major-Generals Haynes was tasked with security and a reformation of manners, but he was hampered by the limits of the early modern state and Cromwell's own contradictory political and religious ideas. The Restoration saw Haynes imprisoned in the Tower before emerging to return to the community in which he had been raised, and continuing the links with some of those he had worked with for Cromwell and the kin he had left behind in New England in dealing with the norms of early modern life.

This book will appeal to specialists in the area and students taking courses on early modern English and American history, as well as those with a more general interest in the period.

A Preview for this title is currently not available.
More Books By David Farr
View All