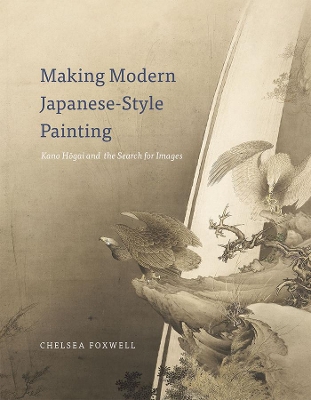 Kano Hogai and the Search for Images

The Western discovery of Japanese paintings at nineteenth-century world's fairs and export shops catapulted Japanese art to new levels of international popularity. With that popularity, however, came criticism, as Western writers began to lament a perceived end to pure Japanese art and a rise in westernized cultural hybrids. The Japanese response: nihonga, a traditional style of painting that reframed existing techniques to distinguish them from Western artistic conventions.?Making Modern Japanese-Style Painting?explores the visual characteristics and social functions of nihonga and traces its relationship to the past, its viewers, and emerging notions of the modern Japanese state.

Chelsea Foxwell sheds light on interlinked trends in Japanese nationalist discourse, government art policy, American and European commentary on Japanese art, and the demands of export. The seminal artist Kano Hogai (1828?88) is one telling example: originally a painter for the shogun, his art eventually evolved into novel, eerie images meant to satisfy both Japanese and Western audiences. Rather than simply absorbing Western approaches, nihonga as practiced by Hogai and others broke with pre-Meiji painting even as it worked to neutralize the rupture.

By arguing that fundamental changes to audience expectations led to the emergence of nihonga?a traditional interpretation of Japanese art for a contemporary, international market?Making Modern Japanese-Style Painting?offers a fresh look at an important aspect of Japan's development into a modern nation.