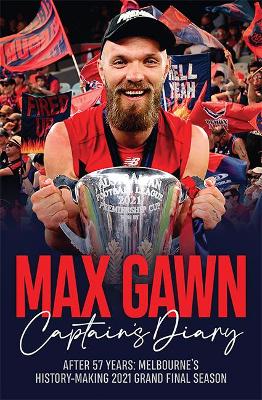 The Max Gawn Captain's Diary relates how, after 57 long years, the Melbourne Football Club's team won the AFL's 2021 Premiership. How, over the course of the season, they rose to the top of the ladder and proved they were the team to beat if you wanted to win the flag in 2021. But given the long drought and lack of finals experience, it was never going to be easy. As the season progressed, Max Gawn and his team turned the tide of public opinion and their supporters began to dream big. The Demons showed the grit, talent and aggression that a true Grand Final challenger needed.

Revealing and insightful, popular Melbourne captain Max Gawn takes us through the season, the talented players, their amazing coach, and a finals campaign where a Max Gawn goal after the siren put them in top spot on the ladder. And how, in the Grand Final, after a tense first half, the team claimed a Grand Final victory, with a 74-point triumph in front of a packed Perth stadium and millions of TV viewers locked down by COVID-19. Max and the Demons brought the cup home to Melbourne.