This text offers a balance of clinical and social psychological theory and research, as well as prevention and intervention techniques with the purpose of understanding and ultimately ending gender-based violence. The authors address several forms of violence, including rape, intimate partner violence, stalking, and sexual harassment in a contemporary linguistic style carefully crafted to avoid victim blaming. Although most men do not perpetrate violence against women, such violence is not a "women's" issue; it will take the strength and courage of both women and men to solve this human issue.

This book moves full circle in its coverage of the topic as it explores the silent epidemic of men's violence against women, the grave consequences of this violence on both individuals and society, and the historical and current foundations that serve to both criminalize and tolerate men's violence against women. The authors describe a variety of efforts to treat both offenders and victims highlighting both their vital importance and their insufficiency in preventing violence. The final part of the book contains descriptions of model violence prevention approaches and techniques for implementing these programs. Readers are empowered as they discover how they can be part of the solution.

Men's Violence Against Women is intended as a text for courses in gender-based violence in a variety of disciplines including psychology, sociology, and women's, men's, and/or gender studies. The book is also a valuable resource for college and community gender-based violence prevention and intervention program providers.

Other Editions - Men's Violence Against Women by Christopher Kilmartin 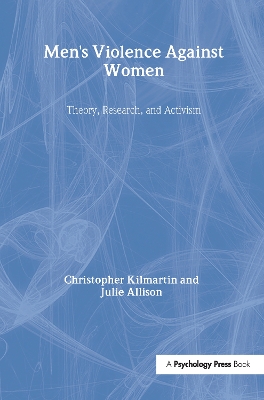 A Preview for this title is currently not available.
More Books By Christopher Kilmartin
View All