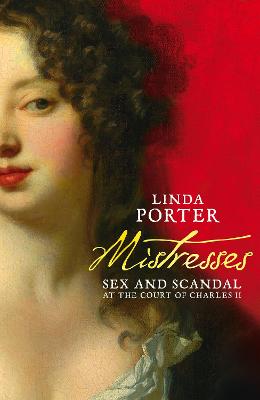 Mistresses: Sex and Scandal at the Court of Charles II

Description - Mistresses: Sex and Scandal at the Court of Charles II by Linda Porter

According to the great diarist, John Evelyn, Charles II was 'addicted to women', and throughout his long reign a great many succumbed to his charms. Clever, urbane and handsome, Charles presided over a hedonistic court, in which licence and licentiousness prevailed.

Mistresses is the story of the women who shared Charles's bed, each of whom wielded influence on both the politics and cultural life of the country. From the young king-in-exile's first mistress and mother to his first child, Lucy Walter, to the promiscuous and ill-tempered courtier, Barbara Villiers. From Frances Teresa Stuart, 'the prettiest girl in the world' to history's most famous orange-seller, 'pretty, witty' Nell Gwynn and to her fellow-actress, Moll Davis, who bore the last of the king's fifteen illegitimate children. From Louise de Keroualle, the French aristocrat - and spy for Louis XIV - to the sexually ambiguous Hortense Mancini. Here, too, is the forlorn and humiliated Queen Catherine, the Portuguese princess who was Charles's childless queen.

Drawing on a wide variety of original sources, including material in private archives, Linda Porter paints a vivid picture of these women and of Restoration England, an era that was both glamorous and sordid.

Buy Mistresses: Sex and Scandal at the Court of Charles II by Linda Porter from Australia's Online Independent Bookstore, BooksDirect.

Other Editions - Mistresses: Sex and Scandal at the Court of Charles II by Linda Porter A Preview for this title is currently not available.
More Books By Linda Porter
View All