Modern Architecture and the End of Empire

Description - Modern Architecture and the End of Empire by Mark Crinson

This title was first published in 2003: Modernist architecture claimed to be the 'international style' but the relationship between modernism and the new dispositions of nations and nationalities which have succeeded the old European empires remains obscure. In this, the first book to examine the interactions between modern architecture, imperialism and post-imperialism, Mark Crinson looks at the architecture of the last years of the British Empire, and during its prolonged dissolution and aftermath. Taking a number of case studies from Britain, Ghana, Hong Kong, Iran, India and Malaysia, he investigates the ambitions of the people who commissioned the buildings, the training and role of architects, and the interaction of the architecture and its changing social and cultural contexts. This book raises questions about the nature of modernism and its roles that look far beyond empire and towards the post-imperial. 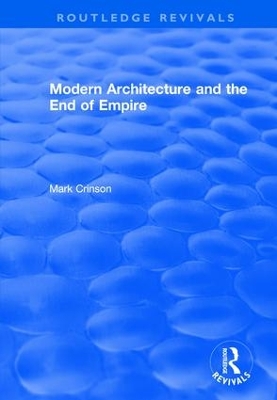 A Preview for this title is currently not available.
More Books By Mark Crinson
View All