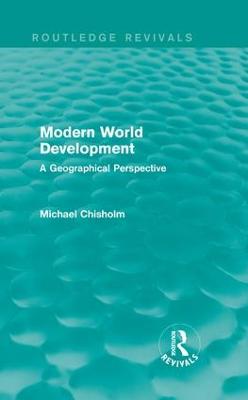 Since the time of Adam Smith, there has been a voluminous literature concerned with the differing wealth of nations and the variation in the nature of economic growth, and several schools of thought have held precedence at different times. The fundamental mechanisms have been regarded by some as capital accumulation and investment, and by others as entrepreneurial ability.

Modern World Development, first published in 1982, shows that the length of time under consideration materially affects the relative significance assigned to the factors involved; similarly, the size of an area cannot be ignored. Through an examination of the major theories of economic growth, the role of natural resources, the core-periphery model of world development, environmental change and the concept of 'human capital', Professor Chisholm has written a stimulating and important book which will appeal to students of economics, history and geography. A Preview for this title is currently not available.
More Books By Michael Chisholm
View All