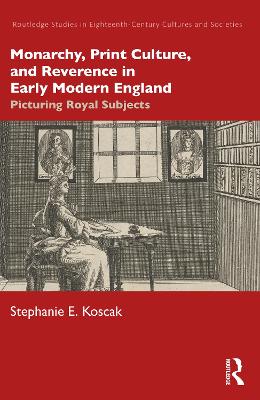 This richly illustrated and interdisciplinary study examines the commercial mediation of royalism through print and visual culture from the second half of the seventeenth century. The rapidly growing marketplace of books, periodicals, pictures, and material objects brought the spectacle of monarchy to a wide audience, saturating spaces of daily life in later Stuart and early Hanoverian England. Images of the royal family, including portrait engravings, graphic satires, illustrations, medals and miniatures, urban signs, playing cards, and coronation ceramics were fundamental components of the political landscape and the emergent public sphere. Koscak considers the affective subjectivities made possible by loyalist commodities; how texts and images responded to anxieties about representation at moments of political uncertainty; and how individuals decorated, displayed, and interacted with pictures of rulers. Despite the fractious nature of party politics and the appropriation of royal representations for partisan and commercial ends, print media, images, and objects materialized emotional bonds between sovereigns and subjects as the basis of allegiance and obedience. They were read and re-read, collected and exchanged, kept in pockets and pasted to walls, and looked upon as repositories of personal memory, national history, and political reverence.