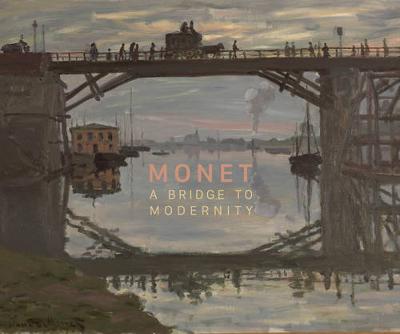 Monet - A Bridge to Modernity

Description - Monet - A Bridge to Modernity by Anabelle Kienle Ponka

French painter Claude Monet (1840-1926) is one of the most popular artists of all time. His paintings of water lilies, haystacks, cathedrals, and much more are all celebrated and beloved. For the first time, this book explores a new aspect of Monet's work: his fascination, during the 1870s, with bridges. After moving to Argenteuil, a small town on the outskirts of Paris, Monet was drawn to the local footbridge near his house on the banks of the Seine. His painting of it, The Wooden Bridge, 1872, is a composition of startling modernity. The book begins with this work and explores Monet's use of the bridge motif from 1872 to 1877 in the aftermath of the Franco-Prussian war and beyond. Beautifully illustrated and published to accompany a major exhibition, the book explores how Monet sought to establish himself as a leader of the avant-garde and how his paintings of bridges played a pivotal role in this context. Focusing on twelve major paintings by Monet, the catalogue further examines the Impressionists' response to their ever-changing environment and the late nineteenth-century transformation of Paris and its suburbs. The publication consists of three sections featuring three essays followed by an illustrated chronology: Monet's use of the bridge as a testing ground for his innovative ideas, the role of photography, illustrations, and contemporary influences; the expansion of Paris and the urban cityscape; the role of Impressionism in the context of the Franco-Prussian war. Text in English and French. AUTHORS: Anabelle Kienle Ponka is Associate Curator, European and American Art, at the National Gallery of Canada. Simon Kelly is Curator of Modern and Contemporary Art at the Saint Louis Art Museum, Missouri. Richard Thomson is the Watson Gordon Professor of Fine Art at the University of Edinburgh. 62 colour images