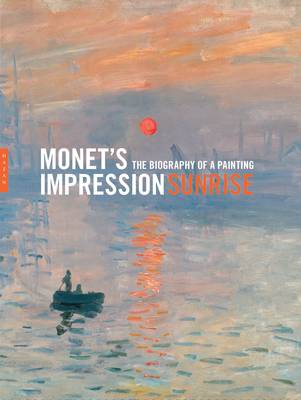 The Biography of a Painting

An intriguing portrait of an early Impressionist masterwork, tracing the painting's history and reception from its creation up to the present day

In April 1874, thirty artists-among them Claude Monet, Auguste Renoir, Camille Pissarro, Paul Cezanne, and Edgar Degas-participated in an extraordinary exhibition held at the Paris studio of the photographer Nadar. A particularly scathing review of the show in the newspaper Le Charivari bore the headline "The Exhibition of the Impressionists," a derisive play on the title of one of the paintings exhibited by Monet called Impression, soleil levant (Impression, Sunrise), thus giving this disparate group of artists the name by which they would henceforth collectively be known.
This beautiful book accompanies a major exhibition celebrating the 140th anniversary of the First Impressionist Exhibition. It offers a colorful biography of Impression, Sunrise, from the influences that led to its creation in 1872 and the circumstances of its display two years later, to its eventual acquisition by the Musee Marmottan Monet in the mid-20th century. This study of the world-famous painting also brings the narrative up to date, analyzing the art-historical rediscovery of the work in recent decades and its enshrinement as a foundational painting in the history of modern art.

A Preview for this title is currently not available.
More Books By Marianne Mathieu
View All