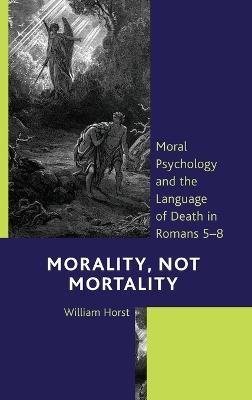 Morality, Not Mortality: Moral Psychology and the Language of Death in Romans 5-8

Description - Morality, Not Mortality: Moral Psychology and the Language of Death in Romans 5-8 by William Horst

This study argues that the language of "death" as a present human plight in Romans 5-8 is best understood against the background of Hellenistic moral-psychological discourse, in which "death" refers to a state of moral bondage in which a person's rational will is dominated by passions associated with the body. It is death of this sort, rather than human mortality or a cosmic power called "Death," that entered the world through the transgression of Adam and Eve in Eden. Moral death was imposed on humanity as a judgment against this initial transgression, in order to increase sinful behavior, which ultimately serves to increase the magnitude of the glorious revelation of God's grace through Jesus Christ. Likewise, creation's subjection to "corruption" and "futility" in Romans 8 involves the detrimental effects of human moral corruption, not the physical corruption of death and decay. Ultimately, the plight on which Paul focuses much of his attention throughout Rom 5-8 is a matter of morality, not mortality.

Buy Morality, Not Mortality: Moral Psychology and the Language of Death in Romans 5-8 by William Horst from Australia's Online Independent Bookstore, BooksDirect.