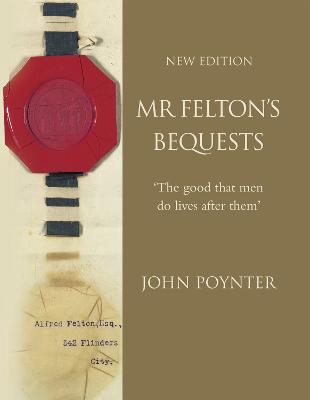 "When Alfred Felton died in 1904 he left o378,033 in trust to the people of Victoria, the income to be split between approved charities and the acquisition of art."

"Alfred Felton, a bachelor of definite opinions and benignly eccentric habits, was one of the remarkable group of Melbourne merchants who dominated the economy of the Australian colonies in the decades after the gold rush. In 1904 he left his substantial fortune in trust, the income to be spent by a committee of his friends, half on charities (especially for women and children), and half on works of art for the National Gallery of Victoria, works calculated to raise and improve public taste . The Gallery suddenly gained acquisition funds greater than those of London s National and Tate galleries combined, and between 1904 and 2004 more than 15 000 items were purchased for it by the Felton Bequest.

Although the last quarter of the twentieth century saw a dramatic and exciting expansion of Australian art museums , Patrick McCaughey writes in the foreword of this book, no institution could hope to replicate the collection of the National Gallery of Victoria assembled under the aegis of the Felton Bequest.

How the Felton Bequests Committee carried out its tasks, in cooperation and sometimes in conflict with the Trustees of the Gallery, is a human story of many tr

A Preview for this title is currently not available.
More Books By John Poynter
View All