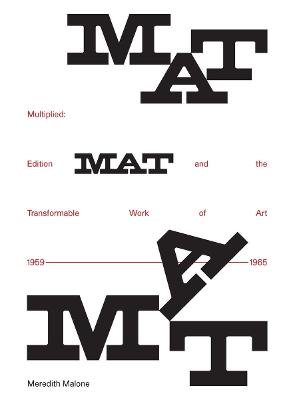 Multiplied: Edition MAT and the Transformable Work of Art, 1959-1965

Description - Multiplied: Edition MAT and the Transformable Work of Art, 1959-1965 by Meredith Malone

In 1959 Daniel Spoerri pioneered the first programmatic series of multiples three-dimensional objects issued in edition to be broadly distributed. With a radical emphasis on multiplication and movement, Edition MAT (Multiplication d'art transformable) presented an international selection of work by key figures in postwar kinetic and Op art.

Multiplied is the first in-depth English-language study of this seminal project in the history of postwar art. The catalog presents the entirety of the three collections-1959, 1964, and 1965-consisting of 48 artworks by 35 European and US artists associated with kinetic and Op art, including such leading figures as Marcel Duchamp, Dieter Roth, and Jean Tinguely, alongside lesser known artists. With four essays, artist entries, and an appendix of newly translated historical texts, this volume sheds light on under-studied artworks as well as the body of critical thought connecting art, commerce, and display in the postwar period.

Other Editions - Multiplied: Edition MAT and the Transformable Work of Art, 1959-1965 by Meredith Malone A Preview for this title is currently not available.
More Books By Meredith Malone
View All