Music as Model, Method and Metaphor in Theatre-Making

As the complicated relationship between music and theatre has evolved and changed in the modern and postmodern periods, music has continued to be immensely influential in key developments of theatrical practices. In this study of musicality in the theatre, David Roesner offers a revised view of the nature of the relationship. The new perspective results from two shifts in focus: on the one hand, Roesner concentrates in particular on theatre-making - that is the creation processes of theatre - and on the other, he traces a notion of 'musicality' in the historical and contemporary discourses as driver of theatrical innovation and aesthetic dispositif, focusing on musical qualities, metaphors and principles derived from a wide range of genres.

Roesner looks in particular at the ways in which those who attempted to experiment with, advance or even revolutionize theatre often sought to use and integrate a sense of musicality in training and directing processes and in performances. His study reveals both the continuous changes in the understanding of music as model, method and metaphor for the theatre and how different notions of music had a vital impact on theatrical innovation in the past 150 years. Musicality thus becomes a complementary concept to theatricality, helping to highlight what is germane to an art form as well as to explain its traction in other art forms and areas of life. The theoretical scope of the book is developed from a wide range of case studies, some of which are re-readings of the classics of theatre history (Appia, Meyerhold, Artaud, Beckett), while others introduce or rediscover less-discussed practitioners such as Joe Chaikin, Thomas Bernhard, Elfriede Jelinek, Michael Thalheimer and Karin Beier.

Other Editions - Musicality in Theatre by David Roesner 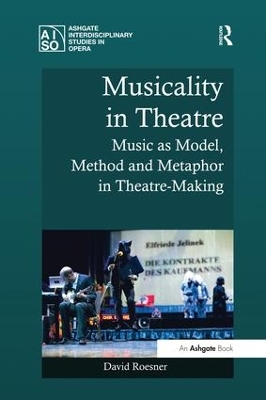 A Preview for this title is currently not available.
More Books By David Roesner
View All